The Melaka River Cruise is at the top of my list of recommended things to do in Melaka. In fact, it’s worth taking the cruise twice if you have the time, because the Melaka River day cruise and River of Light night cruise are both unique and separate experiences. If you come to Melaka in the first place, you were likely attracted to it for its historic significance (and of course great food). And one thing you will see plenty of during a Melaka River Cruise is its history and the fingerprints of time.

A Little History of the Melaka River

The Melaka River begins at the foot hills near Hutan Simpan Bukit Tampin in Negeri Sembilan and flows 40 kilometers south-west to the Straits of Malacca. The river connected with inland waterways providing inland traders a way to get their forest produce to the Melaka markets; gums, rattan, resins and the like all being highly sought after.

Both the Malacca Straits and Malacca River (Sungai Melaka) were important trade routes back in the 15th century; a time when the Malacca Sultanate was at the height of power and Melaka was known worldwide as one of the most important trans-shipment ports in the world. 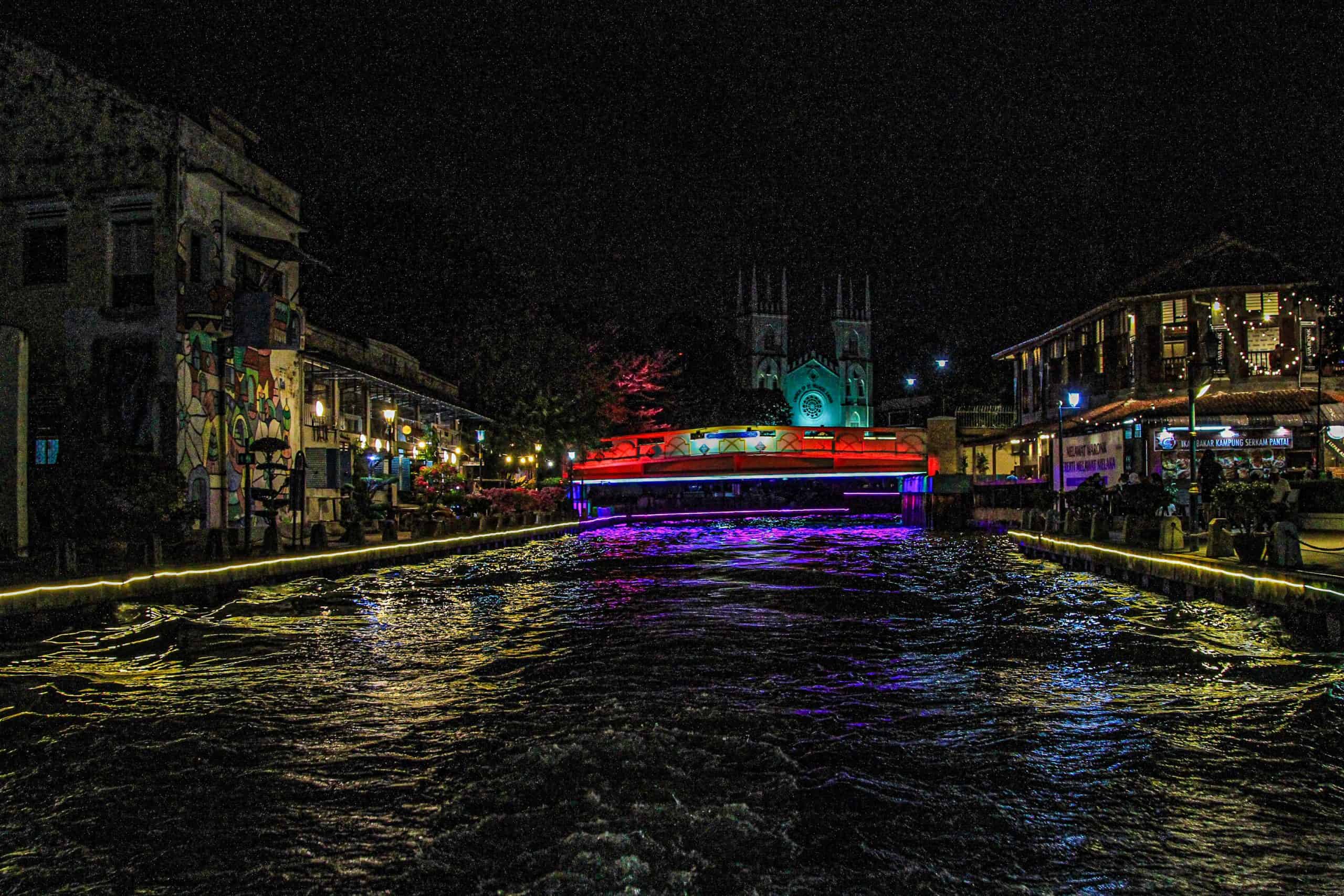 Favorable location, ocean patterns and wind cycles made the Straits of Malacca a commerce star in maritime Asia. Trade vessels from the Malay Peninsula, the Riau Islands, and the Northern coast of Sumatra brought their goods through Melaka as the Malacca Straits was also the shortest shipping route between the Indian Ocean and the Far East.

Ships from all over the world entered the Melaka River channel and brought with them a unique heritage that lingers in Melaka City to this day.

How Long does the Melaka River Cruise Take?

The roundtrip Melaka River Cruise covers just 9-kilometers of the famous river and takes about 45-minutes. It may seem shorter than that at night, as it’s one kaleidoscope of colorful lights after another and quite easy to lose track of the time.

Plenty to See Along the Melaka River Cruise Route

The Melaka River Cruise is a convenient way to see the general lay of the land and visually earmark nearby landmarks for further exploring. It’s also just a great way to relax; kick back, see the passing sights and enjoy the river’s gentle breeze.

During the cruise the river boats pass a variety of famous Melaka city landmarks, such as Jonker Street, Church of St. Francis Xavier, Kampung Morten and the Kampung Hulu Mosque, just to name a few. You will also see loads of gorgeous street art. Do make note of several interesting bridges you will pass under along the way. They all have historic significance and are photogenic to boot. Some are more historically significant than others, but noteworthy none the less.

The Bridges of Sungai Melaka River

Other history (circulating the internet) about this particular bridge is that its original existence was as far back as the 1500s, when the Portuguese invaded Melaka. Apparently, they seized the bridge, cut off local communications between the communities on the two sides of the river and thus conquered Melaka. I’m not sure I buy this as fact, but just putting it out there.

The Kampung Jawa Bridge was soon nicknamed the ‘Ghost Bridge’. Prior to World War II the bridge was often referred to as ‘the Gateway to Hell’, due to the number of nefarious activities available on the other side of the bridge; opium, alcohol, gambling, etc.

Market Bridge (Jambatan Pasar)
The wooden Market Bridge is said to have been built around the 1500s during the Portuguese rule or 1885 depending on your source.  It links Kampung Hulu to Kampung Jawa, where there was once a central market.

Hang Jebat Bridge (Jambatan Hang Jebat)
Named after Melaka’s famous warrior Hang Jebat, the original bridge was made from wood and destroyed during one of the many wars. It was rebuilt in 2008 with concrete, and a special styrofoam was used for the foundation construction.

Interesting, right? The Melaka River Cruise is almost a living museum with all the history flowing through the muddy waters of the Sungai Melaka. But as you can see from my photos, the night cruise can make for challenging photography (for some of us). If you are keen on getting good scenic night shots, be prepared with proper camera/ camera settings. But like I mentioned earlier, the day and night cruises are both unique experiences and it’s worth taking both.

For other things to see and do in Melaka, check out 8 Free Memorial Museums in Kuala Lumpur and Melaka and A Fun Non-Touristy Day Trip to Melaka City.

How to Get Melaka River Cruise Tickets?

Tickets can be purchased online or at the Spice Garden and Melaka River Square Jetty ticket counters. Can also check the Melaka River Cruise website for special deals and promotions HERE 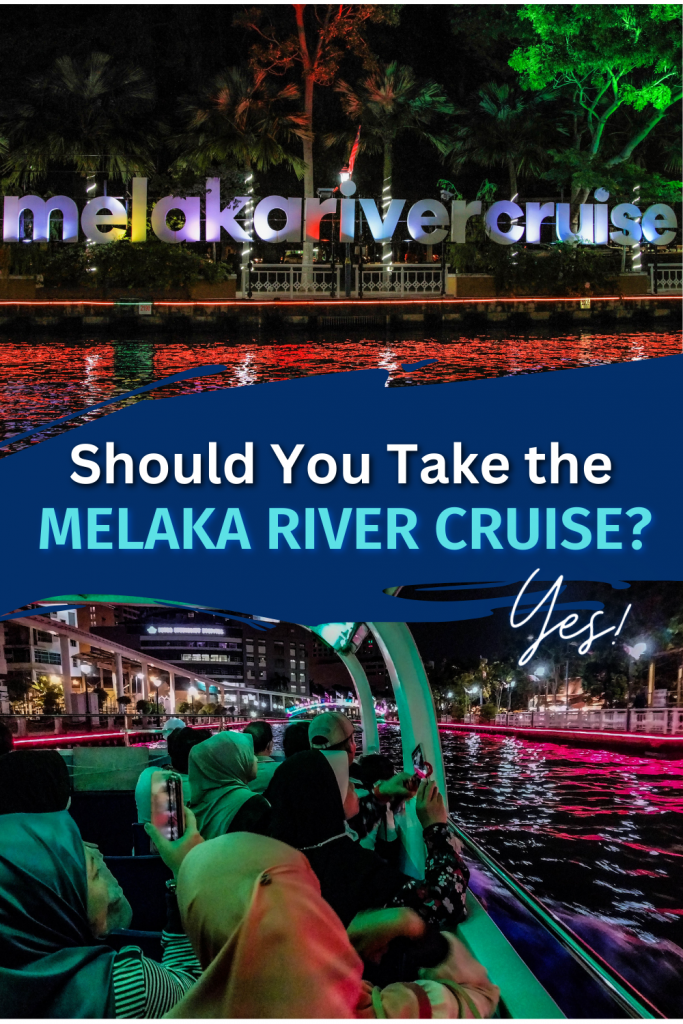