En route to a lunch date, the last thing I expected to see as I shuffled along busy Jalan Sultan Ahmad Shah was a historic cemetery. Surrounded by busy streets and buildings short and tall, sat a fenced in patch of green grass, statuesque leafy trees and a lot of very old looking gravestones. Seemingly hundreds of crypts and tombstones of all shapes and sizes. The sign read Protestant Cemetery and the gate was partially open, as if expecting me.

I went in to check it out the eerily quiet cemetery and there was no one else in sight. Just a few trash bags of leaves left behind by someone tidying up. Just outside the fence, the honking of passing cars and revving engines were somehow muted by the whispers of rustling leaves and the mish-mash of scattered graves.

The information plaque at the entrance gives a general history of the cemetery. It includes a location map and the names of a few of the more prominent residents; the ‘special’ ones.

According to the plaque, the cemetery was originally known as the ‘Burial Ground’, but the Northern Road Protestant Cemetery was first established around the time of the British East India Company’s first settlement in 1786. It was the sole graveyard for over 100 years, until a new cemetery was eventually opened on Western Road. Jalan Sultan Ahmad Shah, by the way, was previously known as ‘Northern Road’.

At some point in time the colonial elite felt it was important enough to divide the cemetery into Protestant and Roman Catholic sides. They even separated the two sections with a wall, as if the dead would actually care. No, of course they wouldn’t. But their society might. The plaque also states that many individuals were buried in the cemetery in unmarked graves and on top of other graves, in an attempt to maximize space.

Those powers that be, decision makers would probably be shocked if they could have seen into the future with caskets eventually buried on top of caskets and the mortal remains of commoners sharing space with the Penang elite. But never mind lah, those mortal remains still remain in their unique historic time capsule giving visitors a unique glimpse of the life (and death) of Malaya colonialists and ‘others’.

It’s unknown how many people were actually buried in the Protestant cemetery, a 2013 survey recorded 459 original plot locations and various memorials. Of those, 150 are not identifiable. Many memorials were destroyed during World War II, when bombs landed in both sections of the cemetery. Bombs also landed on St. George’s Church, destroying many of the burial records that were kept there as well.

Of the various ‘historic personalities’ residing in the Old Protestant Cemetery, Captain Francis Light, himself, gets the honors of being listed as a resident. He died in 1794, just eight years after the first settlement was established. John Alexander Bannerman, the governor of the Prince of Wales Island (aka Pulau Penang), is also among the list of inhabitants. He died in 1819 after two short years of his governorship. Prince of Wales Island, by the way, was changed back to its original moniker of Pulau Penang in 1876.

The last burial recorded at the Northern Road Protestant Cemetery was Cornelia Josephine Van Someren before the cemetery closed in 1892.  The Western Road Christian Cemetery, which opened in 1890, then became the new ‘burial ground’.

It’s difficult to say what is the most intriguing about this cemetery. The beauty of the hand carved stones, or the wording used in the brief bios. Unfamiliar words, some of which I had to look at twice. Or the ages of so many who died so young; brave adventurous young adults who chose to seek their fortunes in a new land.

Was it greed or desperation that led them to Malaya? Or was it the lure of adventure? And as morbid as it may sound, their demises sometimes spelled out with exotic words like Malaria and Jungle Fever. But then some simply stated, ‘expired’. So many stories to be deciphered from a few lines of text. Fascinating. I couldn’t help but think of the demise possibilities of modern times; liver failure, fiery car crash, drug overdose. Not nearly as adventurous sounding.

One lone headstone caught my eye; Alexander Distant. The tombstone read, “Follow Me”. And so, I did. First stop, Google. But Alexander Distant was nowhere to be found. However, I did manage to find his son William, whose existence at least warrants a spot in Wikipedia. William Lucas Distance was born in Rotherhithe (London) in 1845. A whaling trip with his father, to the Malay Peninsula, in 1867, sparked an interest in natural history and resulted in William publishing a book about butterflies of the Malay Peninsula; Rhopalocera Malayana (1882-1886).

Unfortunately, the dates don’t add up. Alexander died in 1883 at age 48. Meaning he would have been on the whaling trip at age 32 with his then 22-year-old son William. Ahhh, but maybe there was a typo. Still sad that he didn’t get any accolades (or career recognition) etched in his tombstone. Not that I agree with his career choice, but I can at least applaud his bravery.

There are so many untold stories that lie beneath the grounds of the Old Protestant Cemetery. Sadly, after it ceased operations in 1892, the cemetery was left neglected for decades. The bombings during the World War II Japanese invasion also took its toll. It wasn’t until 1993 that any conservation efforts began. A second stab at conservation came in 2007. Finally, a more recent effort in 2012 by the Georgetown World Heritage Inc, the Penang Municipal Council and the Penang Heritage Trust.

It was only later that I was able to find out more in depth information about the Old Protestant Cemetery from the Georgetown World Heritage website. I regret not having known more before my own short visit, so be sure to take a look before you go. Located just a short walk from the Bayview Hotel Georgetown, the Protestant Cemetery is a fascinating glimpse at Penang’s colonial past.  For anyone interested in Malaysia’s history or old cemeteries in general, it is definitely worth stopping by to pay your respects. 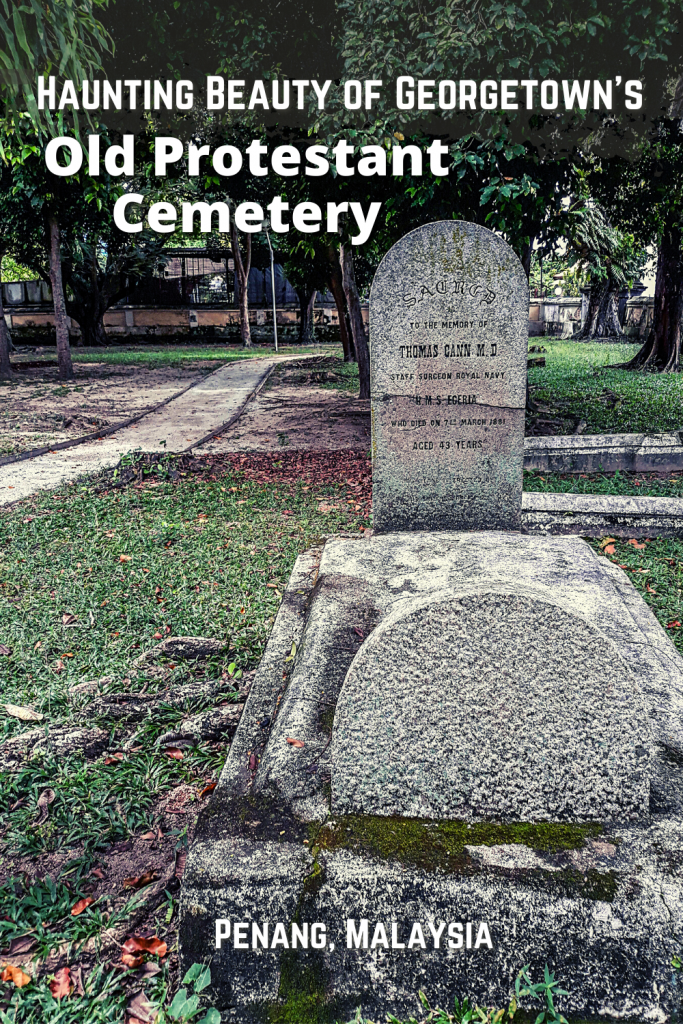