When someone lifts the roof from a Kelulut (box-style) bee hive, plunges a straw into the comb and offers you a taste, you very well don’t turn that experience down. This is how I found myself eye to eye with some very busy but nonchalant bees. I obviously wasn’t the first human they had seen up close and personal, but they were certainly the first Stingless Bees in Malaysia that I had ever seen in such proximity. Much less any (hive guarding) honey bees for that matter. My visit to Langkawi Black Bee Farm turned out to be much more than I had bargained for and a fascinating glimpse of a Malaysian made product with huge commercial potential; Malaysian Stingless Bees and their honey.

Most everyone knows what honey looks and tastes like. And honey bees? Most definitely. An insect renowned throughout history as a symbol of a strong work ethic and superior time management often synonymously compared by those of us with hectic schedules, ‘I’m busy as a bee.” But mention Malaysian Stingless Bees or Stingless Bee Honey and you’re guaranteed to get a few quizzical looks.

If you guessed 'Hive of Stingless Black Bees' you'd be correct. Imagine my surprise to be offered a straw to taste test this unique honey straight from the hive! Especially while bees were swarming around my face. And yes, it's true they don't sting!

With over 500 species of stingless bees buzzing around the world, you’ve probably already unknowingly encountered these fascinating insects. In Malaysia alone there are reportedly 30 known species of stingless bees (known in Malay as lebah kelulut). Langkawi Black Bee Farm specializes in Trigona bees; the Trigona itama being the largest of the species and the Trigona minima, the smallest.

The honey from stingless bees is not what you would expect. The taste is slightly sour. The closest I can compare it to would be a cider vinegar aftertaste. A couple of years ago I purchased a bottle from a charismatic moto-vendor I had encountered at a bus stop. I later took a swig from the bottle and immediately spit the honey out. I had thought it was spoiled or ‘fake’. Later enlightenment had me shaking my head in regret as I had tossed the 55ringgit worth of prime Malaysian Stingless Bee Honey in the trash. Stingless Bee Honey may be an acquired taste, but one does not toss it in the trash!

I thought this was the Bersih4 mobile unit, then found out he was selling honey! All the way from Jitra, Kedah cruising through Pahang. #igdailypic #travelling #malaysiaboleh #madu #bees #igmalaysia #igkedah #travel #igpahang #yellow #wanderlust #roadtrip

The reason the honey has such an unusual taste is that the walls of the bee hives are made from propolis (bee glue), not wax. Propolis is a mix of bee saliva and beeswax gathered from the usual botanical sources; flowers, tree sap, plant resin, etc. It’s used to seal holes in the hive, but the anti-microbial properties of the propolis also seep into the honey. This increases fermentation of the honey, thus the sour taste. But along with this is an increase in health benefits. Studies have shown that the natural antioxidant properties of honey increase (even more) after fermentation.

It’s not just the unique taste of honey that sets these Malaysian Stingless Bees apart, but the ‘honeycombs’ themselves. They look downright alien and are created, again not from wax, but from the propolis itself. A closer look reveals an intricate web of tiny honey pots created from a rainbow of different colored plant resins.

Malaysian farmers are finding that stingless bees are of great benefit to their crop production. Stingless bees have a flight range of about 500-meters which keeps them generally close to home. Some Malaysian farmers are now keeping stingless bee hives primarily for the concentrated pollination services of the industrious insects. Their honey bee cousins, however, have a flight range of about 2 kilometers, enabling them to take their pollinating roadshow down the street or to someone else’s orchard or farm.

Also, notable, is that stingless bees are now being credited with contributing billions in ringgit to the national forestry industry as the top pollinators of valuable trees such as the Meranti and Cengal.

Due to increased popularity, new beekeepers are now being educated on more sustainable ways of transferring their initial bee hives from the jungle to another location. The easiest method, is of course cutting down the tree and taking tree and hives away in one neat package. Unfortunately, this is not sustainable and in fact will affect the neighboring flora which needs the stingless bees for pollination (including those valuable Meranti trees). 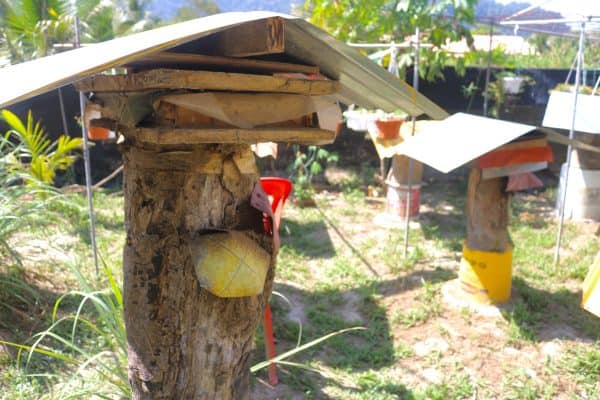 Stingless Bees in Malaysia can be divided into two groups; one group can be successfully bred and kept in boxes while the other needs to be left in their natural jungle environment. The two species that thrive in boxes in Malaysia are the Trigona. More specifically, the Geniotrigona thoracica and Heterotrigona itama. 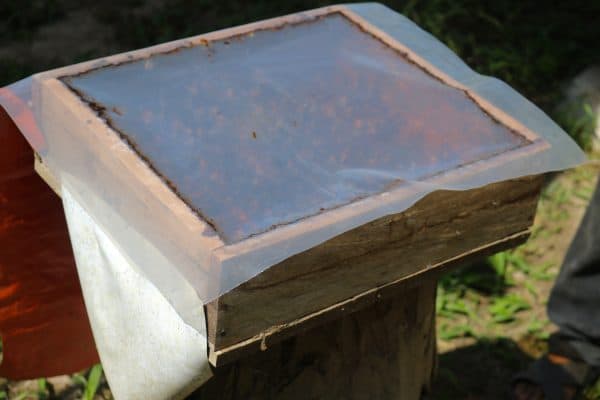 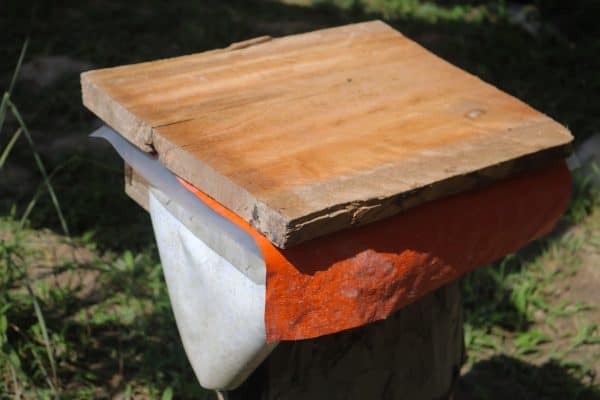 The sustainable way is not especially labor intensive and is more economical as well as eco-friendly. And that is to basically breed the bees in hives and then split the hives up, creating more hives. The only trick apparently is that the hives need to be divided in such manner that each new hive has a queen. And believe it or not, that happens naturally. ‘Queens’ are created from larva which are fed the most. A split hive will choose a lucky larva and commence to fattening up their future leader with the infamous ‘royal jelly’. Big, bold and beautiful if you will. 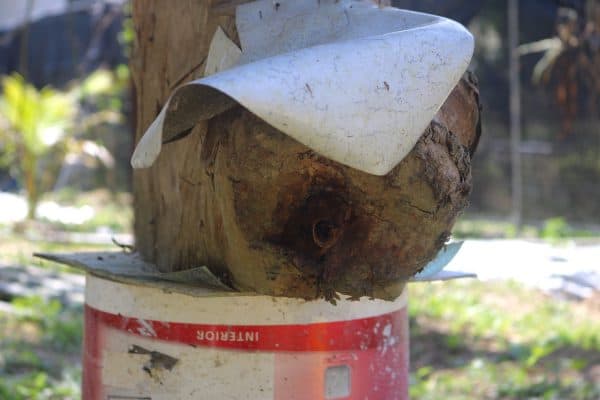 You may have already heard about Honey Hunters in Malaysia. Those honey hunters are all together a different entity from the stingless bee honey market. In fact, those (Asiatic Honey Bees) sting and the process of harvesting their honey is dangerous. You can read more about them HERE

If you are interested in learning more about Stingless Bees in Malaysia or would like to purchase Langkawi-made Stingless Bee Honey. You can visit the Langkawi Black Bee Farm or contact them directly to arrange for a tour or to purchase honey. 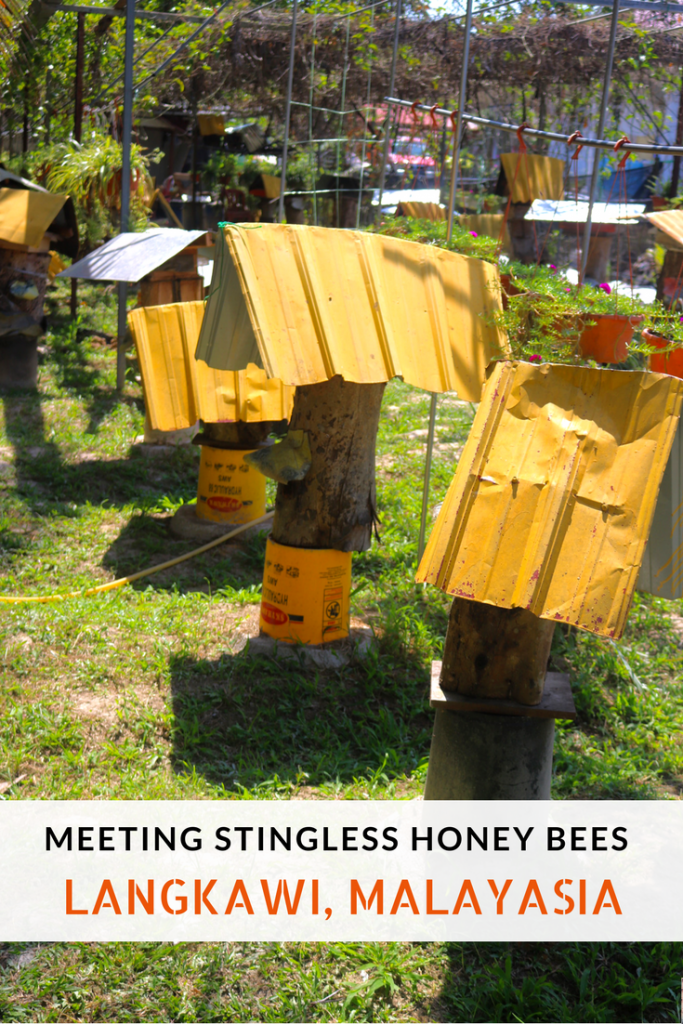