It’s been over a decade since I was first introduced to Gamat; Langkawi’s Magical Sea Cucumber. At the time, I was appropriately impressed with this unusual local product turned successful cottage industry, and even wrote a short blog post about it. I’ve since learned more about the unusual sea creature, and surprised that its medicinal properties are still not that well known by westerners. However, the health benefits of Gamat Sea Cucumber have more recently become a renewed topic of interest for researchers, and more information has become available to the inquisitive general public.

Gamat, by the way, is the Malay name for sea cucumber. In Indonesia they call it Timun Laut, which is the literal translation of sea cucumber (timun-cucumber and laut-sea). In China, it is known as Haishen (Ginseng of the Sea or Ocean Ginseng).

Sea cucumbers are echinoderms, a group of sea creatures with the ability to regenerate various body parts. They are related to Starfish and Sand Dollars. Sea cucumbers have an oblong (cucumber) shape and have no eyes, legs or spinal column. There are more than 1400 species of sea cucumbers around the world. Sea cucumbers can also live up to 10 years. But the best sea cucumber fun fact is that they breathe through their anus!

Discovering the Medicinal Use of Gamat Sea Cucumbers:

But who discovered it? Good question! The use of sea cucumbers apparently goes back hundreds of years across several continents. I was initially under the impression that it was actually discovered in Langkawi, but there must have been something lost in translation on my part. There are several versions of the ‘discovery’ floating through cyber space, but they are based more on folklore style stories, so who’s to say.

One story refers to a fisherman, actually named ‘Gamat’ (from an unknown location), who made the discovery over 300 years ago. As the story goes, his boat capsized and he eventually drifted (clinging to a boat plank) onto a coral reef. He saw the mysterious sea creature and, since he was famished at the time, ate it on the spot. As a defense mechanism, sea cucumbers are known to shoot water or their guts out if disturbed, so this fisherman rubbed the ejected fluid on his reef cuts. And miraculously all of his reef cuts healed quickly and with no scarring.

Another story tells the tale of a fisherman who accidentally stepped on a beached sea cucumber and got ‘squirted’ at. This angered the fisherman (who was obviously already in a bad mood or just very sensitive) and he hacked up the sea cucumber with his machete. When he returned to the area later, he discovered that the chopped-up sea cucumbers had become whole again. That would have been a lapse of time of up to 6 weeks. So, maybe they were in a small tide pool or something and he knew right away that those were indeed his hacked-up sea cucumbers. Who’s to say. But never the less a discovery was made and a once-upon-a-time, story got passed on.

Historically speaking, Sulawesi’s Makassarese trepangers may have started the Gamat Sea Cucumber ball rolling in Southeast Asia. Trepanging is the umbrella word for ‘harvesting sea cucumbers’, akin to shrimping and fishing. According to Merriam-Webster the word ‘Trepang’ was first used in 1783 and was borrowed from the Indonesian Malay word ‘teripang’, which may in turn have come from Indonesian Bajau; an Austronesian language of Sulawesi.

The industrious Makassarese embraced China’s sea cucumber market needs by trading with Indigenous Australians in the 1700s. Exchanging goods for the rights to trepang Australia’s coastlines as well as hire local labor. The remains of Trepang processing plants used in the 18th and 19th century can still be found in Australian locations such as Port Essington and Groote Eylandt. It’s also notable that this was the first recorded relationship between Australia and Asian neighbors.

The earliest documentation of cooking sea cucumbers was in Chinese literature during the Ming and Qing dynasties. The Ming dynasty was from 1368 to 1644, and during that time there was mention of the ‘shape’ of the sea cucumber being related to men’s ‘health’ for obvious reasons. Traditionally, Gamat Sea Cucumber dishes are served on special Chinese occasions as a symbol of longevity.

Various research over the years has found sea cucumbers to be high in protein, niacin and riboflavin. But more interesting is the discovery that sea cucumbers also contain fatty acids such as palmitic, stearic and linoleic acid, which are antioxidants.  Sea cucumber have also been found to contain significant amounts of sulfated glycosaminoglycan which can accelerate wound healing.

In Malaysia, Gamat Sea Cucumber is well revered as a ‘traditional’ medicine. Whether cooked up in a good-for-your-health meal or processed and used in topical treatments for wound healing and other skin problems.

Although plenty of folks eat sea cucumber, since it is also used as a traditional medicine, registration requirements for ‘products for sale’ must include a warning label of what can be taken orally and what cannot. Sea cucumber has blood-thinning properties and oral consumption should be avoided by people taking blood thinners such as Coumadin or Plavix. If in doubt ask your doctor. Those allergic to shellfish should also take precautions.

When making Gamat products, if only pure sea cucumber is used, you get the pure Ayer Gamat (Gamat Water); for oral consumption. But if coconut or other oils and various plant ingredients are added you get Minyak Gamat (Gamat Oil); for external use only.

In Langkawi, the Golden Sea Cucumber is one of the preferred species for Gamat Sea Cucumber products. But another sea cucumber that is favored by locals in Langkawi is the Bronok Sea Cucumber. Unlike more typical reef loving sea cucumbers, Bronok can be found along muddy waterfronts; of which Langkawi has plenty of. Bronok is usually eaten raw. Mixed with a selection of herbs and spices it is made into Kerabu Bronok; a Bronok seafood ‘salad’, which is similar to ceviche.

As I previously mentioned, my initial introduction to Gamat Sea Cucumber was in Langkawi, Malaysia. I have tried various products from Nusantara Maju and absolutely love their topical ointments. Especially the Minyak Gamat. I use it on cuts and abrasions and am convinced it works for faster external healing.

Another local shop source is Warison Saju Langkawi, which I’ve been told was the very first Gamat Sea Cucumber shop in Langkawi. Both are family owned and operated and the families are also related. So, rest assured you’re going to get top quality Gamat from either shop. Travel to Langkawi problematic? Give these shops a call; they may be able to deliver to you. 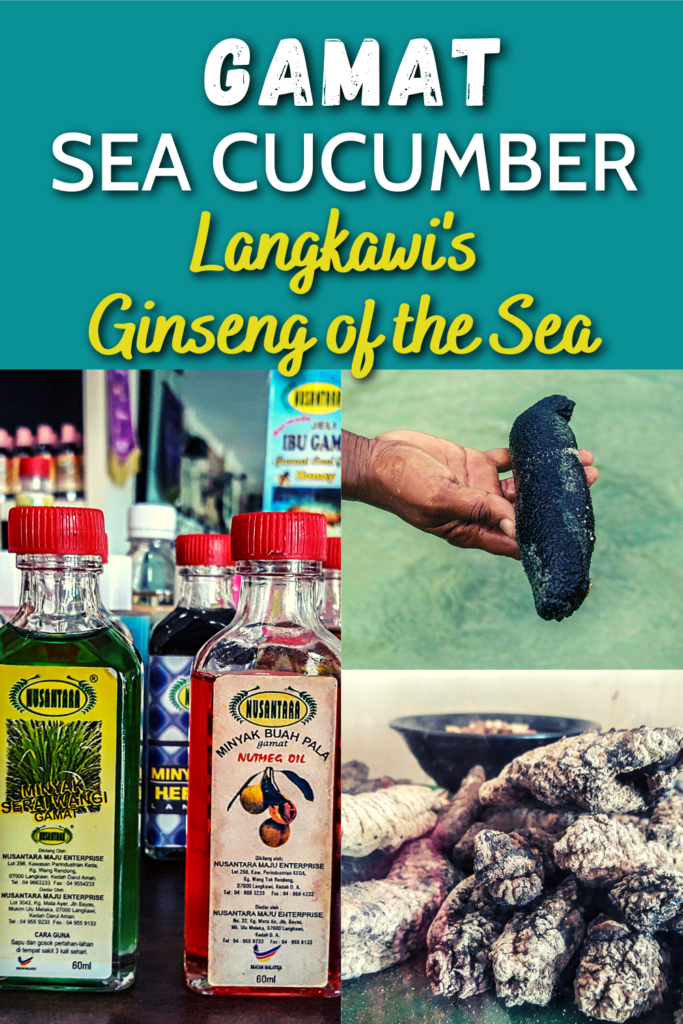