They say eat like a local, and boy howdy, can I do that. Especially when it comes to traditional Malaysian desserts in Langkawi, Malaysia. However, I didn’t become a Langkawi dessert connoisseur overnight. It took time. From abandoning the desperate, expatriate search for my beloved Fig Newtons and Moon Pies to accepting my fate of a future snacking on boring discs of flavorless ‘digestives’ to the fascinating discovery of traditional Malaysian desserts and kuih, Langkawi style.

The name kuih is a big umbrella of love that covers an abundance of tasty sweets as well as savory morsels. But for the sake of this blog post, we’re going to stick with the sweet stuff. And if it looks or tastes like dessert, then by golly in my book it qualifies as ‘dessert’. But by definition, kuih is a bite-sized snack or dessert food. It can include cakes, cookies, biscuits and the like, and is usually made from rice flour or glutinous rice. But all bets are off when it comes to varied ingredients, secret family recipes and the creativity of Malaysian cooks. And for goodness sakes, one person’s bite size is another person’s family serving, so don’t feel too guilty if you can sock away a whole lot of ‘bite-sizes’ all by yourself. Because I certainly can.

Here are 13 traditional Malaysian desserts (and kuih) that hit the flavor mark with me and I think you’ll love them as much as I do. No surprises either, I promise. No sneaking in chopped onions on colorful custards or any of that exotic nonsense. Just good old fashioned not-too-sweet desserts and kuih that will give you a taste of traditional local flavor and make your sweet-tooth a happy camper. Enjoy!

A donut by any other name would taste as sweet. That’s right, Peneram is Malaysia’s version of the donut. It is also called coq meneram by Kedah locals. Other old school monikers include Kuih Denderam and Kuih Telinga Keling. The ‘Kuih Telinga Keling’ version being less popular due to its now deemed derogatory connotation in reference to the long ago ethnic Indians who often sold them.

This South Indian specialty is made with rice flour and brown sugar cooked with Pandan leaves. As a street food, it’s usually made onsite from rolled out dough, cut with a makeshift cookie cutter, and deep fried, as the Peneram tastes best when fresh from a sizzling wok. You can also find these tasty donuts being pre-made and packaged by locals at their homes, and sold at various shops around Langkawi.

The can’t-eat-just-one Kuih Loyang is a delicate snack that doesn’t last long once it has hit greedy fingers like mine. Loyang are said to be of Swedish and Norwegian origin, but variations of the flower-shaped kuih have made their way around the world from Sweden to Sri Lanka to Malaysia, where they are also known as Kuih Rose, Kuih Goyang and ‘Beehive Cookies’. ‘Loyang’ refers to the metal typically used in the mold; loyang means brass in Bahasa Malayu.

Kuih Loyang are made by using an intricately designed metal mold which is heated in oil and then dipped in a batter of flour, coconut milk, sugar and eggs. The mold is then re-dipped in the hot oil until the batter forms a crispy shell around the design and then the mold is removed, leaving the floating kuih to finish frying on its own. It’s a quick but exacting process to keep the fragile shape from falling apart, but the end product looks lovely on a plate and tastes even more lovely.

The popular Apam Balik is easy to spot at the various night markets around Langkawi. Also, referred to as ‘Sweet Puff’, Turnover Pancake, Martabak Manis and several other names, it’s basically a thin pancake filled with sugary ground peanuts and a dollop of canned sweet corn. The batter is a mixture of flour, eggs, sugar and coconut milk, which is poured into saucer shaped molds and cooked over an open flame. Once it’s cooked, it is folded over and ready to eat.

Look for Apam Balik in two sizes; the large family size is thicker and more cake-like than the crisper smaller version. Apam Balik has also been declared a heritage food by the Malaysian Department of National Heritage, so be sure to give this historic dessert a try!

Another local donut variation is Keria, which is made from mashed sweet potatoes and rice flour. Although popular during Ramadan, there are a few locals who make and sell these year round. Keria are handmade from a hand-flattened ball of sweet potato dough and a center hole is poked out prior to deep frying. Post sizzling wok, Keria are coated with simple syrup or sprinkled with powdered sugar. This sweet treat is also known as Kuih Gelang, because the dough is shaped like a gelang (bracelet).

This mysterious little kuih is said to have originated in Kedah state and is named after the Pudak tree; a scented flowering tree. Its creation is a bit of Malaysian sleight of hand and culinary magic. The ‘skin’ of the Bunga Pudak is made with a glutinous flour mix heated in a dry, hot wok. Once the powdery concoction becomes more solid, a spoonful of colorful coconut and sugar mix is added to the center. The edges of the glutinous flour are then folded over, heated about 10 seconds in a frying pan and walah! A Kuih Bunga Pudak is born. This delicate morsel nearly melts in the mouth with little chewing involved. Like I said, it’s mysterious, but tasty none the less. It is also not very common, so if you get the opportunity to taste test, don’t pass it up.

Originating from the state of Kedah (so I’ve been told), or at the very least Northern Malaysia, Dangai is made from glutinous rice, brown sugar and shredded coconut. The batter is poured in two-sided, eclair-shaped molds, then once baked and removed from the mold, the Dangai halves are folded over to create an elongated whole. From outward appearances, it may look a bit dry, but the center stays moist and tasty.

Buah Melaka is pure bite-sized decadence. The dough is made with glutinous rice flour, a bit of tapioca (or corn) flour to make the tiny dough balls slightly harder, and flavored with Pandan leaves. But the magic comes in the form of a chunk of Palm Sugar tucked inside, before it is rolled in shredded coconut and baked. One bite of a Buah Melaka and the melted sugar just oozes into your happy mouth. Melaka claims it as the Malaysian state of origin under the name of Onde-Onde, but you will also find Buah Melaka called Kuih Melaka, Kelepong and in Indonesia, Klepon.

Another local Langkawi favorite, Putu Mayam (also known as Putu Mayong) is of Tamil origin. This lace-like creation can be served up as a dessert with palm sugar and grated coconut or with just about anything, especially curries. Made from rice flour, the dough is hand pressed through a wooden sieve, creating long stringy noodles. The vermicelli-sized noodles are delicately squeezed out in a circular motion onto a cloth covered rattan basket creating a lacy pattern. Several baskets get steamed at the same time ensuring that there is plenty of Putu Mayam to go around. Although there are modern sieves (also called sevanazhi) available, locals will attest to the superior flavor created with the traditional wooden sieve.

A traditional kuih from the state of Kedah, Kuih Karas is created from a liquid-y batter of rice flour and sugar. The batter is drizzled through a sieve style container (or a coconut shell with many holes) into a wok full of hot oil. Drizzled artfully in a circular motion for a few seconds, the resulting nest of flour strings float atop the oil and fry to a light golden brown. The process takes less than 60 seconds as the newly made Karas is folded into quarters and removed from the hot oil to drain. Not only interesting to look at, the crispy Karas has a light sugary flavor and is perfect as a munch-able tea snack.

If you’re a fan of madeleine cakes, you’re going to love Bahulu! Also, known as Kuih Baulu and Kuih Bolu. The Bahulu name comes from the word ‘bolo’ which is the Portuguese word for cake. These airy little cakes are a big hit with locals and tourists alike. The cake batter is heavy on eggs which makes it much fluffier than ordinary cakes. Bahulu are typically baked in brass or metal molds shaped like fish, flowers, fruit or even sea shells giving the small cakes a festive shape and certainly add to the fun factor of snacking.

Dorayaki are of Japanese origin and have a history as far back as the early 1900s. During the late 1970s a few Japanese supermarkets opened in Malaysia and are credited with introducing Dorayaki to Malaysian taste buds. However, I suspect the initial introduction came much earlier during World War 2. But that’s just my theory. At any rate, Dorayaki now makes a regular appearance at night markets across Langkawi.

Cooked on a grill, Dorayaki is made from two small layers of sponge cake batter, with a sweet red bean or kaya coconut spread inside the two layers. Originally named Dorayaki due to its gong-like shape, because ‘dora’ is the Japanese word for ‘gong’. These bite sized pastries hold their freshness for a few days, so stocking up for the week is not uncommon.

The Tokiyoo is very similar to the Dorayaki and is in fact its original shape. The original Japanese Dorayaki consisted of only one layer until 1914, when it then became its present hockey-puck shape. How it became known in Langkawi and other parts of Malaysia as Tokiyoo is a mystery, but it could again have something to do with World War 2. The Japanese military were definitely present in Langkawi in 1941 and 1942. Tokiyoo is made from a small pancake folded over a plop of kaya or other flavorful jams and stays moist and snack-worthy for several days.

Another night market staple is Putu Buluh (bamboo sweet rice), which is also called ‘Indian Pop’. Of Tamil origin, Putu Buluh is ground rice and coconut packed into bamboo cylinders and steamed. This creates a cylindrical shaped sweet that is served up with additional grated coconut and palm sugar. Some venders use metal tubes or even paper cups instead of the traditional bamboo, so be on the lookout for the different Putu Buluh cooking techniques, they can vary from location to location.

So, there you have it! A baker’s dozen of 13 delicious traditional Malaysian desserts to try in Langkawi, Malaysia. But trust me, the selections go well beyond a mere 13. There are many more desserts and kuih specialties to discover in Langkawi as well as the rest of Malaysia. Keep your eyes open at night markets, roadside vendors and mom and pop shops and you are sure to discover plenty more. Happy hunting! 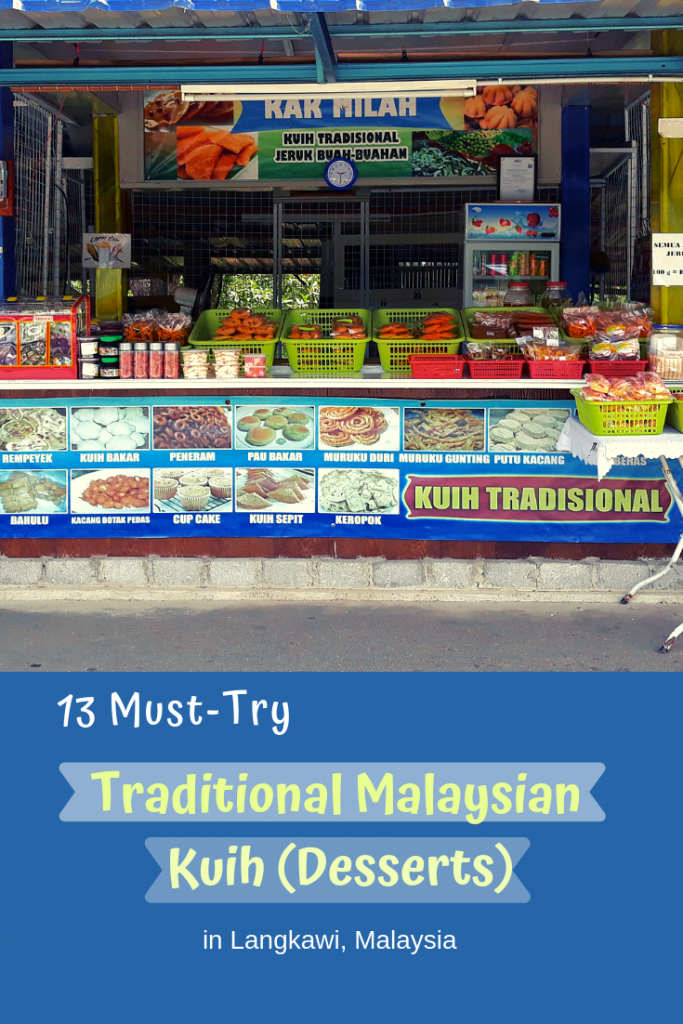