There is no snooze button on a rooster. And whomever declared they start crowing at the crack of dawn is very much mistaken. How do I know this? Because I live with one. Quite by accident actually. But I live with one none the less. And there are many reasons for what they deem crow-worthy; excessive loud noise, hunger, loneliness, and answering the distant crowing of unknown roosters. Sounds a bit like Facebook doesn’t it? I find it serendipitous that 2017 will be the Year of the Fire Rooster (according to the Chinese zodiac). Another year full of promise and potential. And for me, another year to learn lessons of life from a rooster (and a hen). 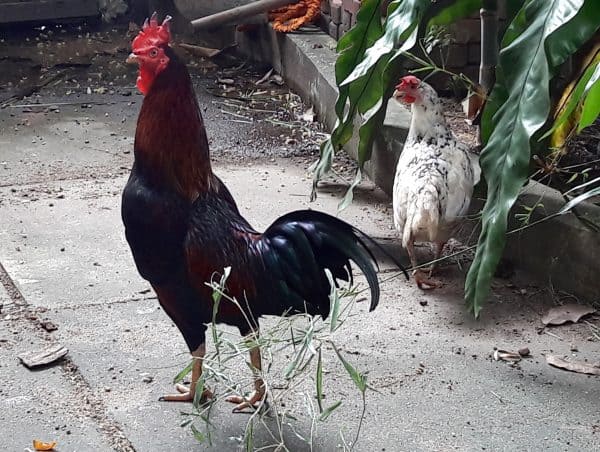 Westerners may pooh-pooh the idea of a Chinese New Year, but an auspicious lunar calendar date makes much more sense to me than the bland ‘western’ date of January 1st year after year. 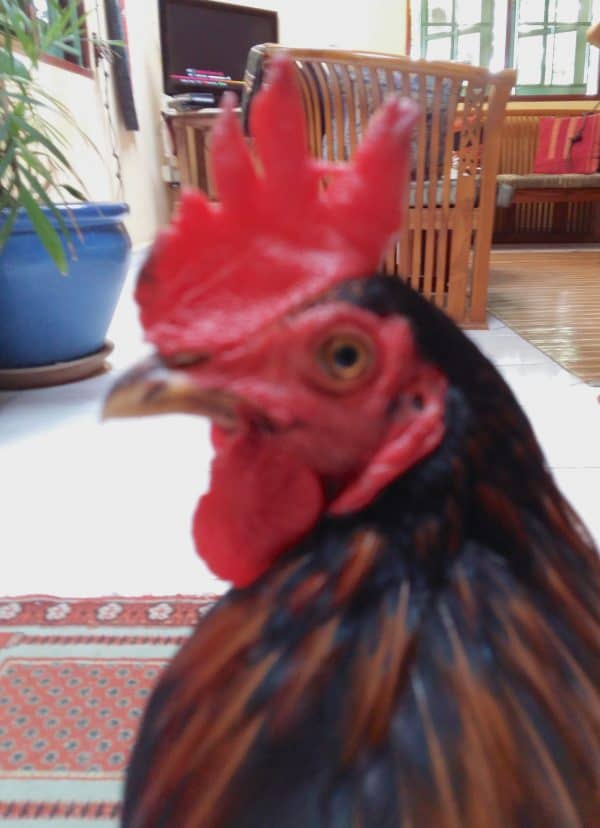 In Chinese element theory, each zodiac year is associated with one of five elements; metal, wood, water, fire and earth. For the non-mathematically inclined this means that a Fire Rooster year comes once every 60 years. Which is probably a good thing for those born in a Fire Rooster year. Unfortunately, while the rest of us will be scraping in the dough and finding love and generally having an awesome year, those born in the Year of the Fire Rooster might find themselves having to work a little bit harder to reach their 2017 goals. That’s right, it’s their unlucky year. Fear not though, everyone eventually gets their chance to have an unlucky year (according to the Chinese zodiac). If they are lucky enough to live that long. 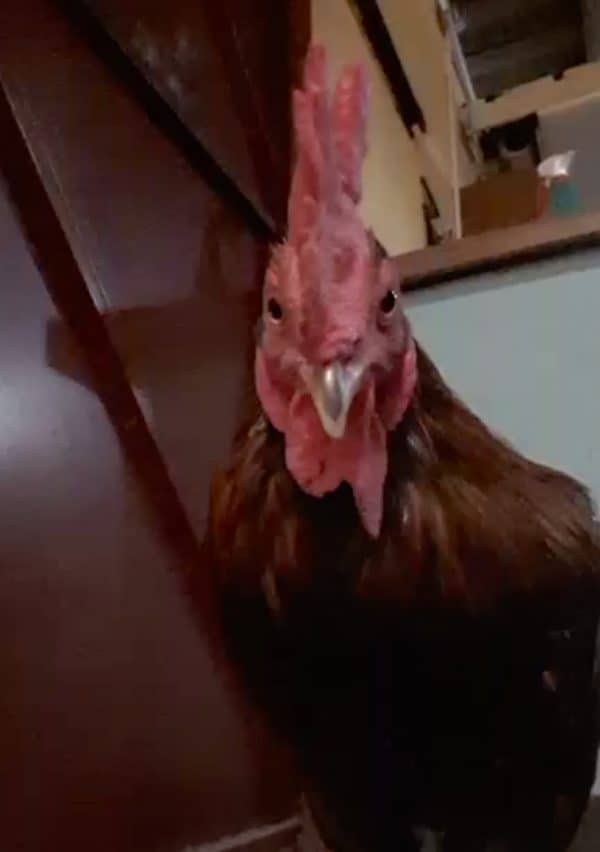 His name is Brendan, by the way, this rooster of mine. In addition to now mandatory early mornings for my household, Brendan has taught me many lessons in the past 8 months and I respect this feathered beast for his sharp talons as well as his strong personality and passion. 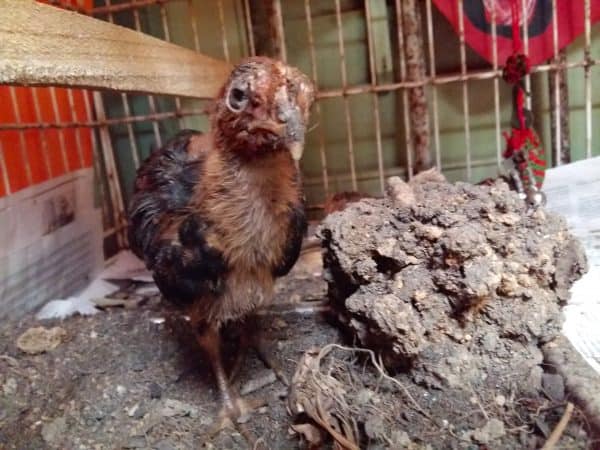 His story began at my doorstep. A seemingly injured bird of mysterious origins needing a place to pass on to its next life. My household offered that with a small cage, food and water. A cage that she soon outgrew. ‘Brenda’ as she was called soon revealed herself as a chicken. Brenda quickly outgrew that indoor cage and eventually revealed herself to actually be a rooster. The early morning whisper of a cock-a-doodle-do and an ‘N’ was added to his name. 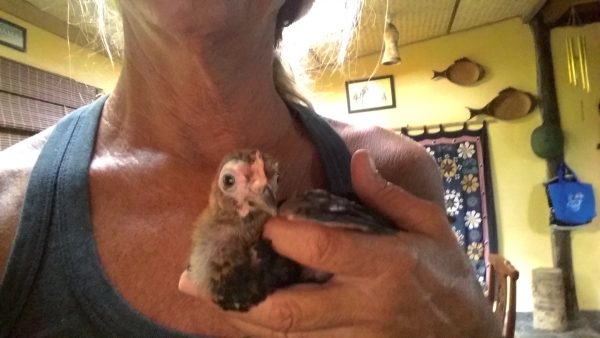 Brendan is a ‘jungle rooster’ and came from kampung free-range stock. According to kampung history, Malaysian roosters were more indigenous to the jungles and were ‘domesticated’ more or less by being brought back to the villages. Free-range to go forth and multiply in villages across Malaysia.

But Brendan didn’t stand a chance in his early days, and now it’s too late for him to be a free-range kampung rooster. His new domesticated life included watching TV and having diced mangoes and granola for breakfast.

However, you can take the boy out of the jungle but you can’t take the jungle out of the boy. Brendan’s teenage months came with a feisty aggressiveness any mothers of male children know. He needed a love interest. 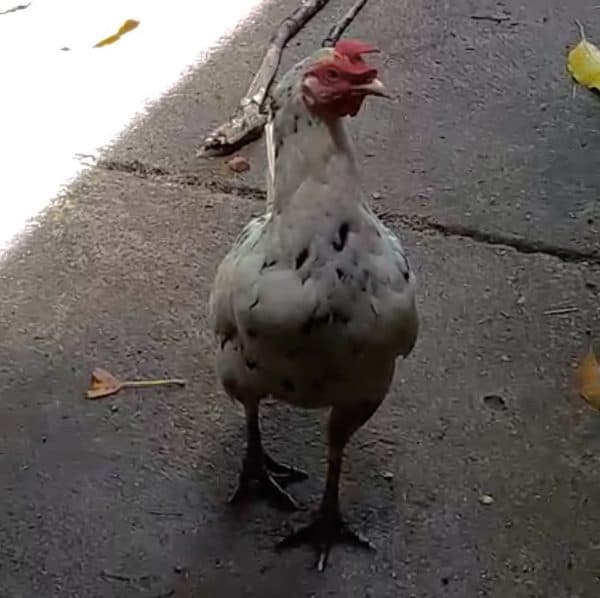 Her name is Grace. She is a blonde bombshell who was born and raised at the Frangipani Beach Resort in Langkawi, Malaysia. High end resort free-range is quite different from kampung free-range. And most definitely different from household free-range. I got very lucky that day, when I chose her from seemingly hundreds. White with black spots and a come hither sexy comb, Brendan fell in love at first sight.

Taking her from her home to a strange environment felt cruel and selfish, but luckily Brendan was immediately head over spurs for her. And he never leaves her side. Now the two spend the day having lengthy conversations and enjoy fresh diced mangoes, granola and various other fine dining in addition to being free-range in a now destroyed flower garden. They bring a sense of peace to my household. Their Zen is contagious. 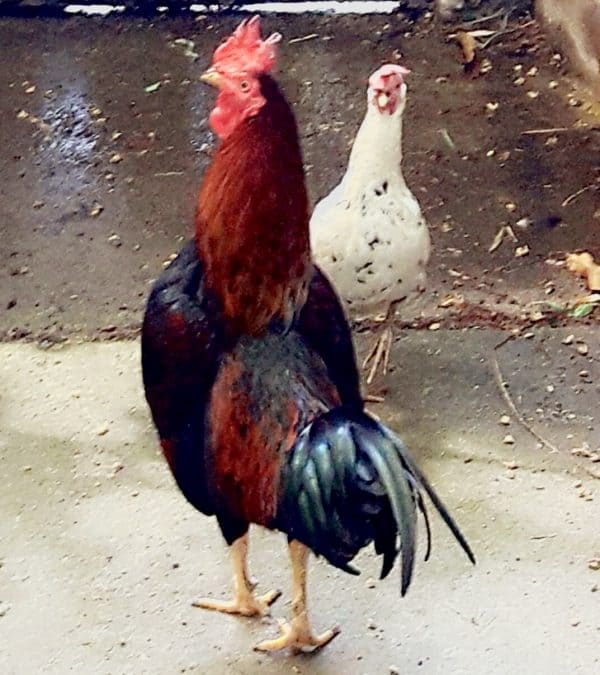 This wouldn’t be the first time I had two opposites of the Lady and the Tramp variety. Earlier last year I was blessed with an abandoned pet store cat who became best friends with one of my abandoned kampung kitty rescues. If you need proof of natural born instincts, put a store bred fancy breed next to a scruffy generational kampung cat. A store bred cat knows nothing about catching geckos or delicately eating a bone laden fish. A kampung cat knows nothing about getting bathed and groomed on a regular basis and water is often their worst enemy. But these two bonded and taught each other. The same way Brendan and Grace have bonded. The same way people of different backgrounds and cultures can bond, if given the opportunity to exchange ideas and find similar passions to embrace.

Yes, much wisdom can be learned from the animal kingdom. 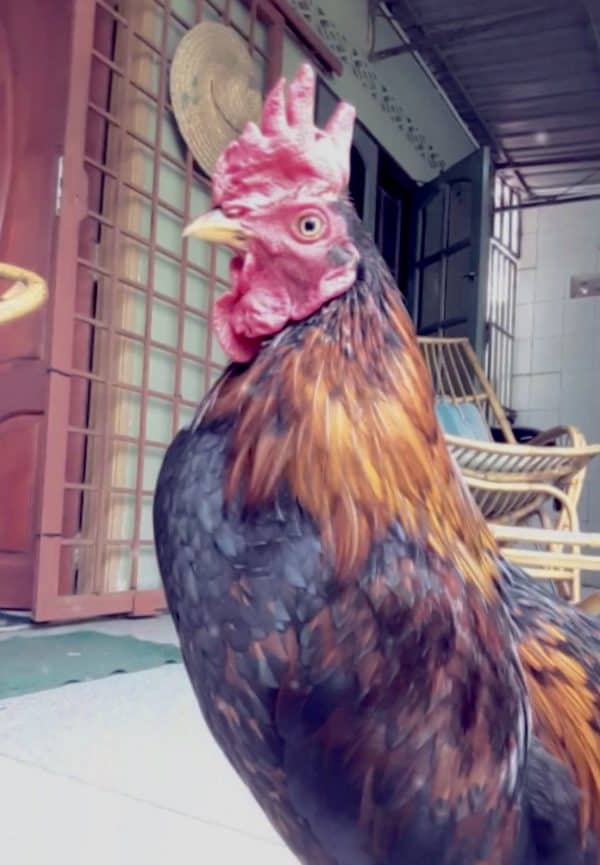 Here is one little fun fact I ran across while researching a bit for this blog. Back in the olden days, when people didn’t have watches or clocks, times of days were replaced with two hour increments named after an ‘earthly branch’. Oddly enough, the rooster hours are from 5:oopm until 7:oopm, when roosters go back to their coops (or trees). And they do, by the way. You could indeed set your clock to a rooster’s evening activities. It’s probably not a coincidence that those sunset hours are also popular happy hour times. So cheers to the New Year and the Year of the Fire Rooster!